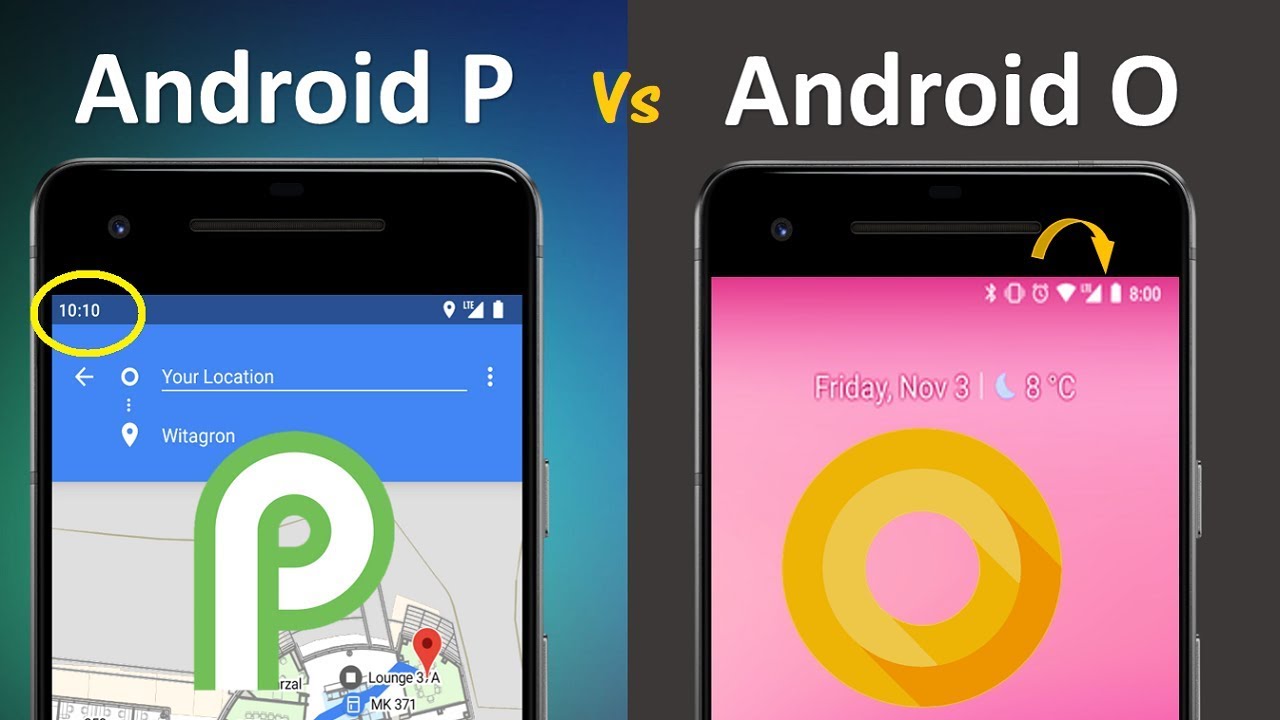 2017 witnessed the release of Android Oreo and apparently, this year seems to be the year of Android P.

Android P is a free software update available for smartphones and tablet devices. When the final version is released, it will be called Android 9. As of now, the Android P Beta version is available for download on Google’s Pixel and a few other flagship devices.

You can witness a myriad of software and visual upgradations in Android P, and most of them stand out as a sore thumb. Some of the prominent changes include quicker and simpler settings, bundled notifications, gestures and an overhauled look and feel of a lot of things.

You can see this also : Top 10 Android P Features – You must know this

Android P is expected to be a huge upgrade from Android 8.0 Oreo. In the following article, we will look at some of the noticeable differences between the two and talk about the interesting feature additions in the new and upcoming Android P. Let’s begin.

This is perhaps the biggest change from the previous Oreo version. Every Android device, until now, had the same set of three physical buttons, i.e. Home, Back and Recent Apps. However, Android P scripts the dismissal of the “Recent Apps” key and instead, brings in the new and improved navigation system to the rescue. While the Home and Back buttons continue to exist, gestures have replaced the way to access the page of recent apps.

This gesture based navigation system works in a convenient way. You need to tap the home button (replaced by a pill) to go to the home page. Similarly, you can swipe up to go to the recent apps page and swipe up long to open the app drawer.

You can see this too : Top 5 Splash Screens : First Impression for Mobile Users

2The UI is more Interactive, Colorful and Rounded

If you compare the UI of Android Oreo and Android P, you will find a marked difference between the two. Unlike in Oreo, the icons in Android P are much more colorful, bright and circular. Even in the quick settings menu, rounded edges for everything leave an enhanced impression.

Moving on, Android Oreo displayed a vertical list of recent apps, but with Android P, the recent apps are displayed in a horizontal layout. This allows the users to view the full screen of the recent apps and quickly check the app’s content without having to open it again. This helps in multitasking.

Besides the UI of Android P being more interactive, this new version also has a huge difference in the way it feels. The ultra-smooth way in which it operates can only be felt in-person.

With this new version, Google has placed an enormous focus on the user wellbeing. It has announced to launch a new system in its final version known as the Android Dashboard. This Android Dashboard will provide the users with important knowledge and stats on how much they are using their phones, how many times in a day do they unlock their phones, hours spent by them on each app, notifications received in a day, etc.

Generally, users find it difficult to turn down their phone at the dinner table. Consequently, Google has added a “Shh” gesture that activates the Do Not Disturb mode. This mode will silent all notifications, except from the starred contacts. So, you can calmly have your dinner without any rushes. Also, the mode can be simply activated by putting your phone upside down on the table.

Moving on, you can check your app usage as well as set app-usage limits for different apps. Once you have reached the limit, the app icon will gray out, indicating that you have exhausted your usage limit. You can also switch your screen to a monochrome palette to help you relax and wind down for bedtime.

The new Android P is all set to maximize your device’s battery life by introducing a new adaptive battery mode. Leveraging the power of machine learning, this system enables the device to learn about the most frequently used apps.

Based on that, the device appropriately adjusts its energy that results in approximately 30 percent reduction in CPU wakeups. This directly improves the battery life of the device.

The volume control feature in Android P is significantly different and improved in comparison to Android Oreo. For instance, now the volume control buttons only control the media volume and not the ringer volume.

Also, these control buttons were displayed on the top in Android Oreo but in Android P, they will appear on the right hand side, making it much easier to control the volume. You can also choose your mode- silent or vibration, from these controls and easily manage the Bluetooth connected devices.

Furthermore, if you repeatedly dismiss your notifications, Android P will come up with a pop up message asking you if you wish to opt out of receiving notifications. The Snooze feature that is available in Android Oreo continues to exist in this version as well.

How to article : Create own ViewPager Transformations Animation?

In Android Oreo, there was no dedicated screenshot key or any kind of features to edit the screenshot.

However, with Android P, you can simply hold the power button to get a screenshot instead of pressing the power button and volume down button simultaneously. Additionally, this new version comes with a native screenshot editor that gives you the option of cropping the image or drawing on it.

Last, but not the least, Google has introduced a plethora of new emojis to make your conversations more interesting. The count is 157 to be precise.

Some of the really cool new ones include a superhero, lobster, face with three hearts, mooncake and llama. Also, there are some significant improvements to the existing ones.

The beta version is readily available for download on the Google’s Pixel. You can download it there and experiment with the all new and improved Android P.

Moving on, Google has recently opened its beta program to third-part OEMs. This implies that the beta version is going to be available on platforms such as Nokia, Sony, OnePlus, Oppo, Vivo and Xiaomi.

Android P is expected to officially launch sometime in August. There is a plenty of time now and things could drastically change with the final launch. This is just a preview and it is anticipated that when Android P gets launched in August, it will feature tons of changes, many more than we have talked about today.

Author Bio: James Grills is a technical writer with a passion for writing on emerging technologies in the areas of mobile application development and IoT technology. He is a marketing advisor – currently associated with Cumulations Technologies a mobile app development company in India.