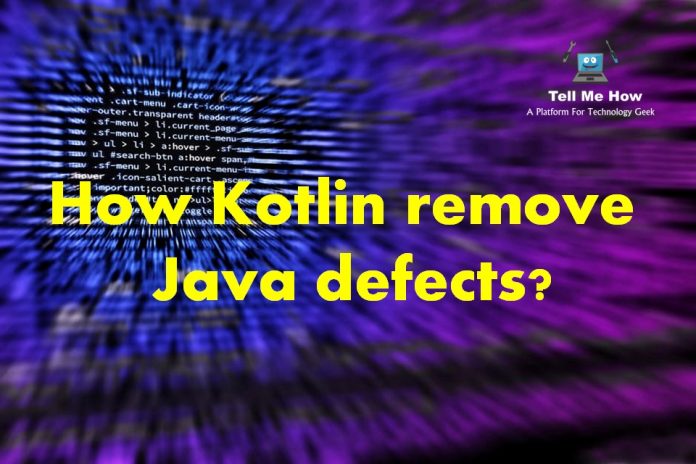 This article looks at many categories of Java defects that Kotlin prevents in addition to null safety. My first article (5 cool thing about Kotlin) provided a brief introduction to Kotlin and showed a surprising impact on productivity.

It’s important to realize the difference in value in fixing a defect in one class versus preventing an entire category of Java defects from occurring in any class.

What we see today:

Let’s see How can you remove Java defects using Kotlin

Preventing defects reduces the amount of band-aid style hot-fixes which are known to cause spaghetti code.

A common source of defects in Java is caused by accidentally checking referential equality instead of true value equality. The examples below show how these types of defects can be introduced even by experienced developers.

The confusion stems from “==” having a dual purpose. Primitives must be compared using “==” and unfortunately you can also use “==” to check object referential equality. The line is further blurred since “==” works as expected for certain types of objects such as singletons, enums, Class instances, etc. so these defects can be sneaky.

Using “==” in Kotlin checks true value equality so it avoids these common categories of defects:

If you purposely want to check for referential equality, Kotlin has triple equals for that so it’s never accidental. A nice addition is that Kotlin eliminates the null check clutter when checking against potential null values due to its stronger type system (details in “Null Defect Categories” section below).

Recommended article : What is Nothing Type in Kotlin?

The equals and hashCode methods are important as we usually work with collections.

Defining an equivalent Person class in Java requires much more than 1 line:

Oops, I lied. The Java version is not quite equivalent since it’s missing an easy way to copy it (eg. clone or copy constructor). I also had to strip out all the nullability annotations and trivialize the Person class with only 2 properties to fit it in the screenshot but data classes typically contains at least a handful of properties. The size difference increases when you add JavaDocs on multiple methods versus the single Kotlin doc for the data class.

Kotlin data classes are much easier to understand and automate most of the work which avoids these categories of defects:

Kotlin replaced the switch statement with a more powerful “when”:

Whenever we use “when” as an expression (such as the above example), the compiler ensures that all scenarios are covered and prevents the following defect categories:

We can also use “when” as a replacement for if-else chains which makes them much easier to follow and and less error prone:

Unlike Java, an assignment is a statement in Kotlin (which does not evaluate to a value) so it cannot be used in a condition. This prevents the following defect categories:

Kotlin made “override” a mandatory keyword when overriding methods which prevents the following categories of defects:

Some more thing for you : Top 12 Advanced Kotlin Tips For Pro Developers

Null is by far the most common cause of defects in Java and masquerades itself in many forms.

Incorrect use of null is the cause of roughly 30% of all defects in Java.

Kotlin prevents these categories of defects with its stronger type system that has nullability built-in. You are forced to make a decision for what should happen whenever a variable might be null. Unlike other languages, this has zero memory or runtime overhead which avoids scalability concerns.

This is different from tools like FindBugs which try to spot null errors because Kotlin takes the opposite approach. Rather than trying to spot null errors, the compiler only passes if it can prove that a variable will never be null whenever it’s used as a non-null value.

Kotlin avoids many of the popular Java defect categories . Although I had high expectations, I was shocked to find so many improvements everywhere I looked. To my continued surprise, I kept discovering additional categories of defects that Kotlin prevents. The language design really starts to shine when subjected to this level of scrutiny and we’re just getting started.

Kotlin Problems and How to avoid them?