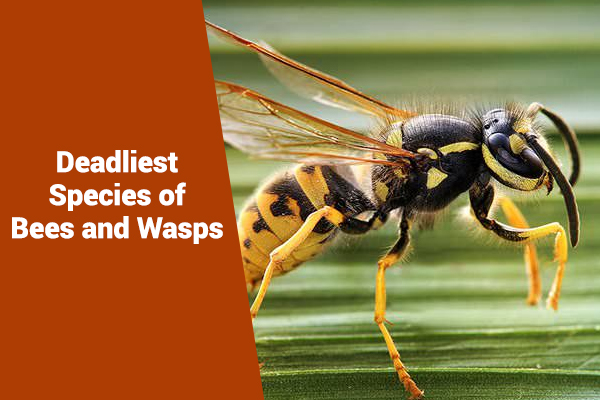 Unlike termites, bees and wasps do not cause damage to your home and buildings in Central Coast instead their presence is claimed essential element in the ecosystem. However, they are typically harmful to humans as the attacking stings can inflict high level of physical harm to us. The degree of pain and effect varies in a group of people – a moderate annoyance for one can be a life threatening experience for another. So, whenever you feel the presence of bees or wasps in your surrounding call pest control in Central Coast, NSW. With professional inspection of the area, you can alleviate the risks of these pests.

In this blog, we have discussed some of the dangerous types of bees and wasps to help you protect yourself in times of danger.

Types of wasps and bees

The three common kinds of wasps and bees in Australia include:

In Australia, you will find around 800 species of bees out of which honeybee is the most pervasive. These bees usually swarm all spring and early summer with their yellow abdominal bands glowing on the stout body. An amazing fact about honeybee is that it is an introduced species for the purpose of pollination and supply of beeswax and honey.

Among the broad species of bees in the country, honeybee is the only type which attack aggressively, others sting only under threat. Honeybee built nests commonly under areas of shelter, especially the ones close to outside wall. Some of their chosen spots are wall cavities, sheds, roof spaces and garages. You may also find them swarm in dense areas where hundreds of them linger to each other forming a large ball hanging down a tree branch.

It is another kind of introduced species similar in body shape to honeybee. European wasp is 10-15mm long having a black banding on its shining yellow abdomen. They have yellow legs, clear wings and a black antenna. They normally build nests underground which is visible through its entrance hole. Despite their generally chosen spots, they also make nests in ceilings, wall cavities and in logs and trees.

European wasp feed on meat, sweet drinks and sweet food. They are influentially aggressive in nature and sting not once but multiple times if the nest is disturbed. If you ever come across the presence of these species, immediately report an expert to conduct bees and wasp control in Central Coast.

These are not at all similar to honeybee when it comes to comparing body shape. A paper wasp has a narrow waist and slender body with small and having total length of 20mm approximately. The nests of paper wasps are easy to identify with its hexagonal cell formation like an inverted cone which further turns round on more cell addition. They build nests on fence tops, tree branches and under eaves. The nest built covers a diameter of 10 to 12 centimeters at maximum including cells with visible white caps.

The sting of paper wasp is the deadliest and way different than that of a honeybee. It can attack multiple times easily as its sting doesn’t leave the body. They don’t generally fall under the category of aggressive species, however won’t spare if you disturb their nest. Their main diet is caterpillars and they act as an important character in the ecosystem as a natural pollinator. Paper wasps also help eradicating small insects and wasps.

Now that you are aware of three most common and harmful species of bees and wasps, get more active in hiring pest inspection services in your area.

How to Motivate Your Students to Do Better

5 Easy Ways to Be More Eco-Friendly

Comparison between Spring Boot and Vertx | Which is better?

4 Benefits of Adjustable Beds and Mattresses