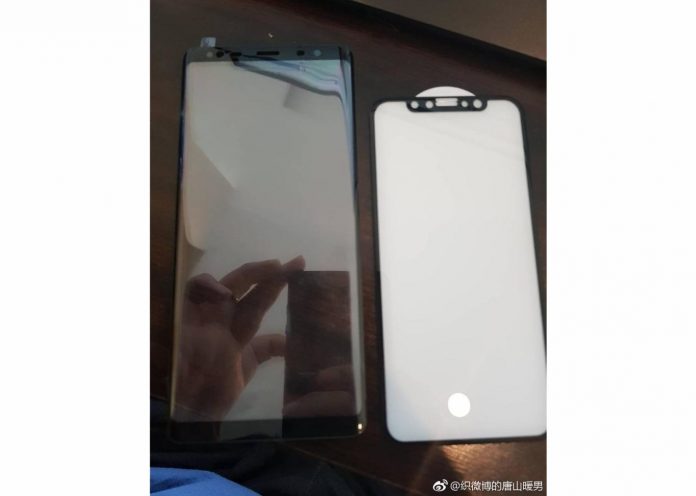 After series of leaks of the upcoming Samsung Galaxy Note 8 and iPhone 8, now we have some more leaks of the front panel of both the device side by side comparison.Apple is all set to introduce all new bezel-less smartphone this year with iPhone 8 and with back to back leaks we learnt a lot about the device.

From the images leaked, we can see the both the flagship side by side comparison, we can see the Samsung upcoming flagship Note 8 is been taller than Apple iPhone 8 and both of them are have an almost bezel-less display and both of them boast large display sizes than the previous generation.The front panel of the Samsung Galaxy Note 8 looks similar to earlier leaks and no changes done.

Recommended article : iPhone 8 will have Samasung oLED like display

From the above images, we can expect Samsung Galaxy Note 8 to feature a similar design and will have similar Infinity display one found on Samsung Galaxy S8 and S8+.The leaked images also show Single-lens secondary camera and will also have Iris scanner, with the display covering on all sides of the device.

Do you know : Which type of Mobile Processors is best?

As per earlier leaks, Samsung Galaxy Note 8 sports 6.3 inches QHD+ AMOLED Infinity display.It will be powered by Exynos 8895/SD835/SD836 chip based on markets.It will be coupled with base 6GB RAM and 64GB internal storage which can be expanded via microSD card slot.It will be the first Samsung device to feature 12MP Dual camera setup aligned horizontally with Dual LED flash and will have the 8MP front facing camera.The device will also come with exclusive S-Pen functionality and will run Android 7.1.1 out of the box.

How to add Social Media Sign Up Library in Android?