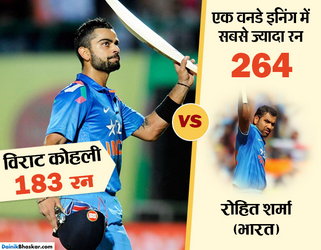 Virat Kohli is currently one of the world’s number one cricketer. Virat Kohli, who has become India’s run machine in every format, has been compared to Sachin Tendulkar for a long time. Despite this, there are some such records of many world cricketers including Sachin who can rarely break it.

This record is the name of Brian Lara.

Reason: Virat is in great form in the Test at this time. Four consecutive four consecutive series have been set. Regardless of this, it can rarely match Lara’s record. That’s because besides them there are many other good players in the team who constantly make runs. If the team is in good condition, Virat himself will not play for the Parslal record. They believe in winning the match.

This record is Rohit Sharma‘s name.

Reason: It is important for the batsman to be attaching from start to 200 in the innings, while Virat is first settled and then plays according to match conditions. They come for batting at number three. In such cases, they have less overs. Right now, the rules of cricket have also changed, in which 5 batsmen in the Death Overs are out of 30 yard circle.

Reason: Virat’s name is 4491 runs (in 56 matches) in a Test career of 6 years. Average is 50. That is, every year he played nine matches. If he also plays nine matches from the current average (50) every year, then he will make 9000 runs in the next 10 years. Despite this, he will be far behind from Sachin.

Reason: Virat has done 27 Tests and 16 Centuries in Tests. A total of 43 Centuries (56 Tests and 179 ODIs) are named after them. Waiting for the first Century in T20. Due to the popularity of fast food cricket, Virat 100 could hardly touch the figure of the International Century.