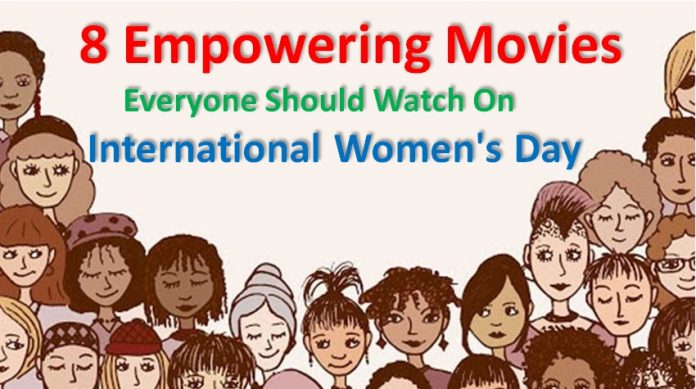 Women power should never be underrated. Over the years, cinema has had a major role to play in changing how a woman is perceived in our society. If you’re looking for a way to celebrate International Women’s Day, we suggest you sit down with a bowl of popcorn and a group of friends to watch some of the best on-screen female characters to grace our screens.

And what better way to celebrate International Women’s Day than with a movie night with the important women in your life?

We’ve rounded up top 8 trending movies that celebrate womanhood in the best way.

Before she was Wonder Woman (Gal Gadot), she was Diana, princess of the Amazons, trained to be an unconquerable warrior. Raised on a sheltered island paradise, Diana meets an American pilot (Chris Pine) who tells her about the massive conflict that’s raging in the outside world. Convinced that she can stop the threat, Diana leaves her home for the first time. Fighting alongside men in a war to end all wars, she finally discovers her full powers and true destiny.

This film went on to become the highest-grossing superhero origin film, which proves once and for all that women make seriously bad-ass superheroes.

Who could forget the true story of Erin Brockovich, the single mother who becomes a legal assistant and almost single-handedly brings down a California power company accused of polluting a city’s water supply.

Played by Julia Roberts, it’s a story about tenacity, drive and not being intimidated by those around you. Her sassy one-liners are also great comedy. Erin Brockovich presents moviegoers with the true story of a woman who transcends her surroundings, takes on the big dogs, and wins.

Considering how regressive Disney princess movies can be, Mulan deserves praise for its portrayal of a woman determine to escape the stereotypes of her gender. A Chinese girl disguises herself as a boy, to take her father’s place in battle and so maintain the family’s honour.

Yes, Mulan showed countless children that women are just as brave and capable as men—it’s society that’s just too sexist to realize. As close to feminism as Disney gets.

This wincingly funny, pertinent and heart breaking road movie means to get under your skin, and it does. Chock-full of great performances and dramatic scenes, this is one truly amazing film that crystallizes a moment in feminist social history for all time.

She doesn’t have the greatest start in life, but Laura makes the best of a bad situation. She’s basically a mini version of Wolverine (well, it turns out she is a clone of Logan – the man behind the superhero), and she can fight an army of men any damn time. Logan spends his days drinking and working as a limo driver after his powers become weaker – but then he meets young Laura who teaches him what it means to experience unconditional love and basically carries him through life, despite being only 11 years old. She takes on more than she should have to but doesn’t moan once.

Logan must now protect the girl and battle the dark forces that want to capture her. This movie in the X-Men series is amazingly moving and grown-up, elevating the superhero genre to new heights.

Considering the suffragette movement happened nearly a hundred years ago, it’s amazing that a film wasn’t made about it until 2015. It follows the story of a young mother who chooses to fight for the movement after growing tired of the injustices suffered by women in the early twentieth century. It will make you proud to be a woman and grateful to those who fought for the rights we enjoy today.

The film makes a series of arguments about the workings of patriarchal power, the complexities of political resistance and the economic implications of the right to vote. Suffragette is satisfyingly small in scope, a human-scale story of epic change. And that allows it to, among other things, portray with depth and respect the deliberative aspects of progress itself.

7 A League Of Their Own

A story about women from all walks of life taking over a baseball team during World War II, A League of their Own reminds us that even if you work somewhere dominated by males, you can still defy expectations and achieve great things. If you’re fighting for a promotion or pay rise at work, you need to watch this.

Everyone loves a good story about the teamwork and triumph at the heart of America’s favorite pastime, and this film adds the twist of women struggling to prove themselves as athletes in the 1940s.

If you went into Mad Max: Fury Road expecting a testosterone-fueled bro adventure, you are not alone. But the movie ended up being one of the most feminist pop cultural moments of 2015—starring Charlize Theron as a lieutenant who risks her life to save a group of women enslaved by abusive men in power.

A passionate film about fighting for what you believe in, Mad Max: Fury Road sees Charlize Theron take on the role of impersonator Furious. Watch this if you want to get fired up to fight for a cause.

Comparison between all NoSQL Database