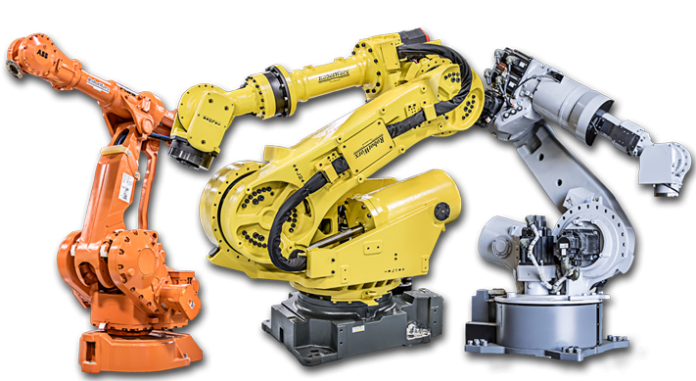 The industrial robot arm is a unique automation system often found in numerous factory floors. Industrial robot arms are used in different and diverse factory tasks to make work easier and to increase efficiency and productivity in the factories they are found at.

There are different types of industrial arms and are found in different factories depending on the tasks that the factories want to them to complete. In addition to tasks, the difference in industrial robot arms is mostly based on the number of axes they have and how far they can reach.

Here is a list of the different types of industrial robot arms.

This is the pioneer robot arm in the world of automation via robotics. It is a stationary robot with a base onto which the arm is fixed. The arm then rotates from this base for a particular distance determined by the length of the arm and creating its general working area.

This was the first type of robot manufactured and it handled tasks such as welding, painting, and assembling.

This is another of the original industrial arm robots. It consists of a base onto which a cylindrical tube is fixed. On this tube is a moving aperture is then fixed. Unlike in the previous robot which has a rotating arm, the arm on this robot moves vertically, up and down along the cylindrical tube.

This robot was assigned tasks such as transport and handling tools and also welding.

A Cartesian robot is based on an x,y, z-axis that allows it to have the ability to move in three dimensions. It is unique in that it slides along these axes rather than rotate like the other robots. As a result of its abilities, it usually requires much larger spaces to work in than the other industrial robot arms. It contains guard rails on which it allows effectors placed on it to slide into the correct position in either axis to execute assigned tasks.

Transporting tools and pick and place tasks are the most commonly assigned to Cartesian robots.

Selective compliance assembly robot arm is the full name for this robot. This robot is unique in that all its movable parts are stationed vertically. As a result, any end-effector attached to the arms of this robot can only move horizontally. In addition, this robot also only works flat surface areas.

It is tasked with duties in assembling and pick and place tasks.

This is a high speed, high accuracy robot. It is formed by three parallel arms joint to a single base to form a parallelogram. Each of the arms controls the end effector to achieve increased speed and accuracy in whichever tasks it is assigned.

This robot is mostly found in the food and drug industries. It is assigned tasks in sorting and pick and place tasks for its speed and accuracy.

The articulated robot arm is the industrial robotic arm most structurally close to the human arm. Just like the human arm, it has a base you can describe as the shoulder that holds another movable part that can be described as the upper arm complete with an elbow joint which then holds the lower arm which holds and moves the end effector to complete tasks allocated.

As a result, it has a large degree of freedom and can work in a large area. Today is the most common industrial robot arm found in factories. It is assigned tasks in welding and palletizing.

These are the most common industrial arm robots. Each kind is favored by different industries and applied to different kind of tasks. When organizations are acquiring the industrial arm robot, there are other factors they consider such as weight load capacity, its reach both vertically and horizontally, the robot’s weight and size to determine whether it is a good fit for the acquiring organization.